“A number of young women danced, having so vowed, a popcorn dance. As thick tassels of maize were their popcorn garlands. And these they placed upon the girl’s heads.”

Pop, pop, pop! The familiar sound and buttery smell conjures happy childhood memories at the movie theater or sitting by the fireplace at home. Just about everyone loves popcorn, and what is not to love? Popcorn has been a favorite food for thousands of years. 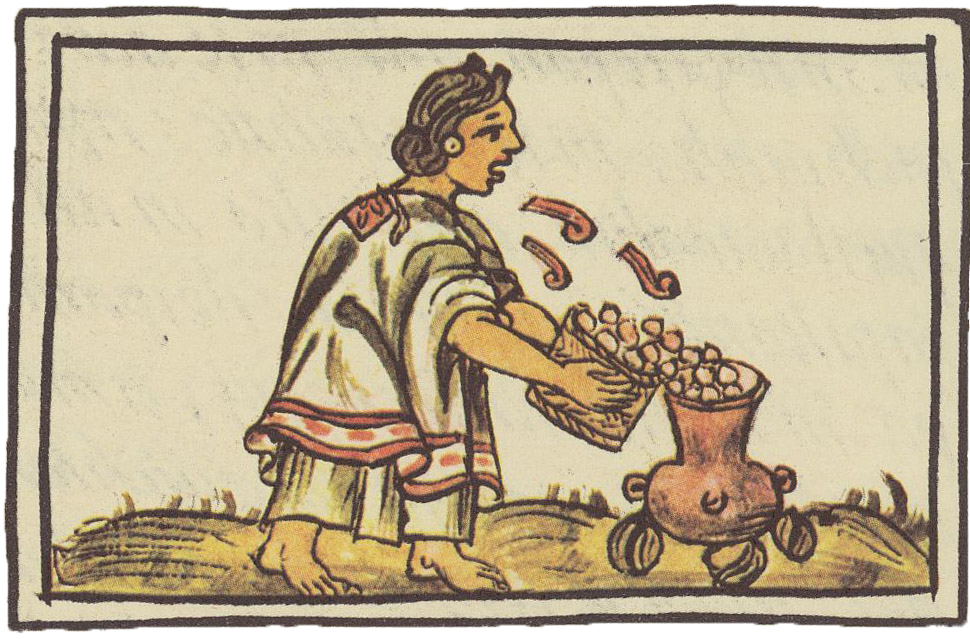 An Aztec woman blowing on maize before putting in the cooking pot, so that it will not “fear the fire.” Florentine Codex, late 16th century.

Indigenous people of MesoAmerica would have had difficulty surviving without this important Mexican grain. Prior to the domestication of corn, its wild predecessor, teosinte sustained native populations. This early form of corn had kernels that were too hard to eat and even too hard to grind. The rock hard outer kernel housed water and starch. As it was heated, pressure would build up inside until it burst. Indigenous people realized this and subsequently, popcorn became an important food source. It is believed that by 5,000 BC this wild grain had been domesticated and cultivated. The challenge of the day would have been to capture the corn as it popped! Gradually, this hard kernel corn developed into a form that could be ground into powder for making dough known as masa.

The Aztecs loved popcorn. They called it momochitl (mo-mo-cheetl), and it was used not only for food but also for decoration, adornment and ceremonial purposes. They even had a word for the sound it makes when it pops, totopoca (to-to-po-ca). Franciscan friar Bernardino de Sahagun arrived in Mexico, then called New Spain, in 1529. In his detailed account called General History of the Things of New Spain, Sahagun wrote of Aztec ceremonies. It states, “A number of young women danced, having so vowed, a popcorn dance. As thick tassels of maize were their popcorn garlands. And these they placed upon the girls heads.” Popcorn necklaces were also placed on statues of Tlaloc, the god of rain and fertility. While popcorn is native to Mexico, evidence of ancient popcorn has been found throughout Central and South America and the Southwestern United States.

Records state that popcorn was a popular food in the colonial United States, even being served at the breakfast table. In the mid-1800’s, popcorn gained popularity in the United States. To cook it, kernels were placed in an enclosed pot with butter or lard and put on or near a fire. Eventually, wire cages called “poppers” housed the kernels which were placed on an open flame. The fluffy snack exploded in popularity when Charles Cretors of Chicago created a roasting machine driven by a steam engine in 1885. It was originally used for roasting peanuts, but within a few years it was also used for roasting coffee, chestnuts and popping corn. This method created uniform results and consistency of flavor as the corn was popped in its seasonings. Mr. Cretors eventually reconfigured the machine to pop corn and roast peanuts simultaneously. This new machine and the popcorn it created took Chicago’s Columbian Exposition of 1893 by storm.

With the creation of movie theaters in the 1920’s, popcorn vendors thought their product was a logical snack for the venue. Theater owners were not enthusiastic, but when they saw the success of the vendors selling the snack outside, they soon brought popcorn and its equipment into their lobbies. During the financially distressed years of the American Great Depression, the popularity of popcorn continued to grow as it was relatively inexpensive. This delicious snack, with its humble beginnings, even contributed to the development of the microwave oven in 1946 by Percy Spencer. 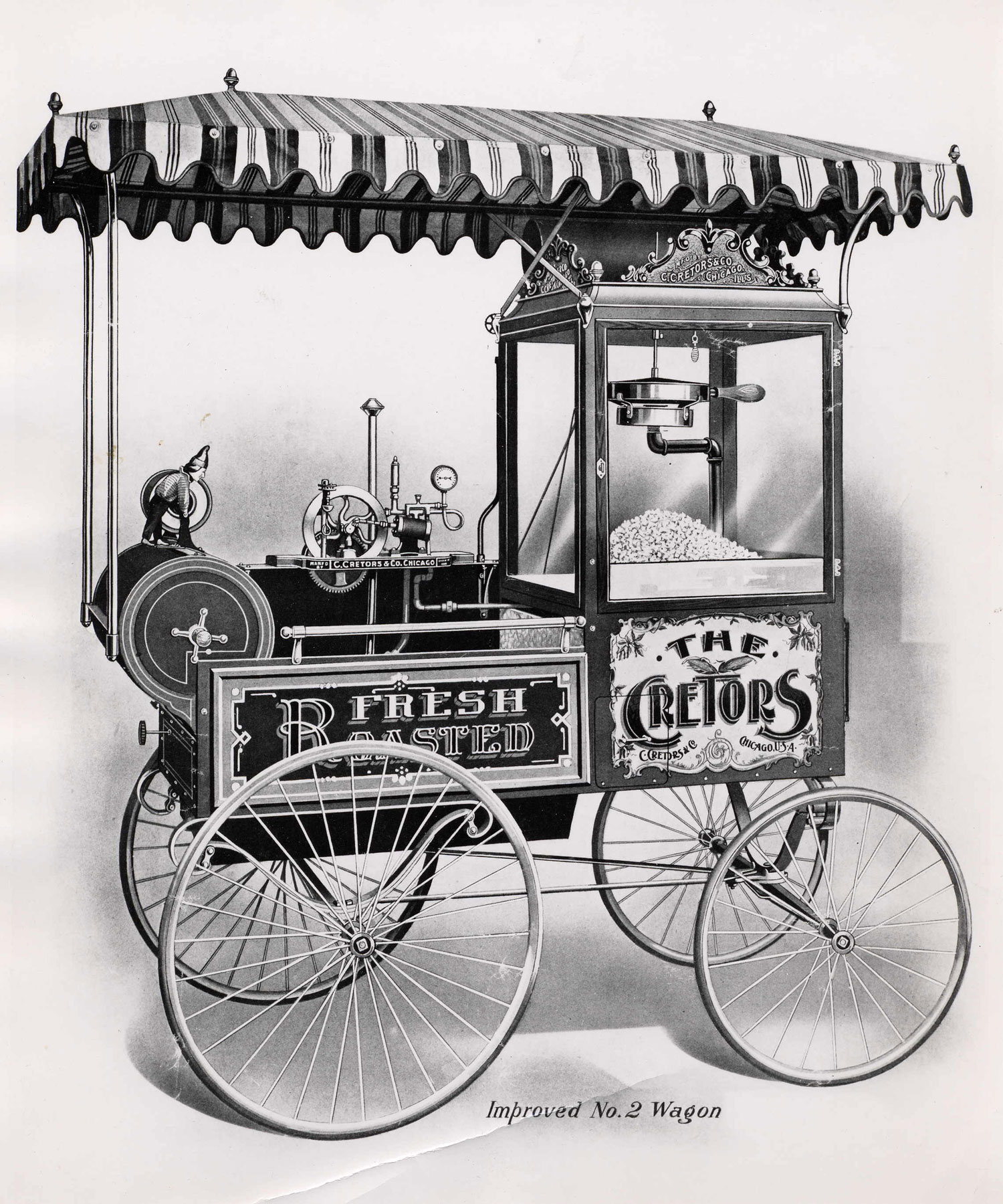 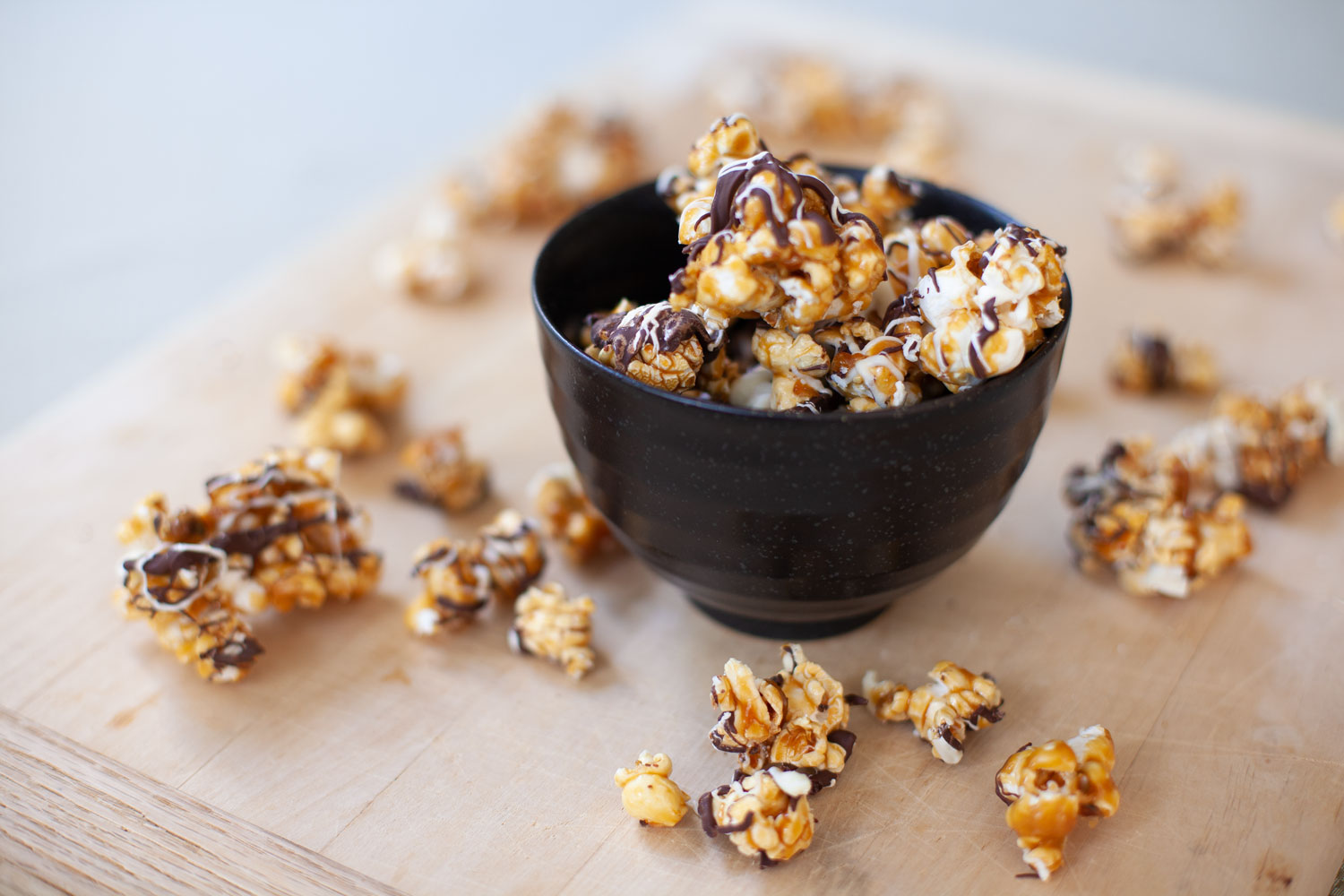 Throughout the years, popcorn’s popularity has continued to grow, from decorating Christmas trees to gourmet snacks. It is estimated that in the United States alone, approximately 17 billion quarts of popcorn are consumed annually. From the days of the Aztecs listening to totopoca to the wafting scent of theater popcorn, this popular food has anchored itself as a convenient snack for cultures across the globe, be it savory, sweet, or somewhere in between.