Birthplace of the Gods

The Sun, The Moon, Feathered Serpents… and the Dead.

You live in one of the most populous cities on Earth. The main boulevard is wide and flanked with ornate buildings teeming with activity. Royal palaces, temples and workshops with highly skilled artisans abound. One of the largest structures in the world is positioned near the center. You could be almost anywhere: New York, Paris, Tokyo… 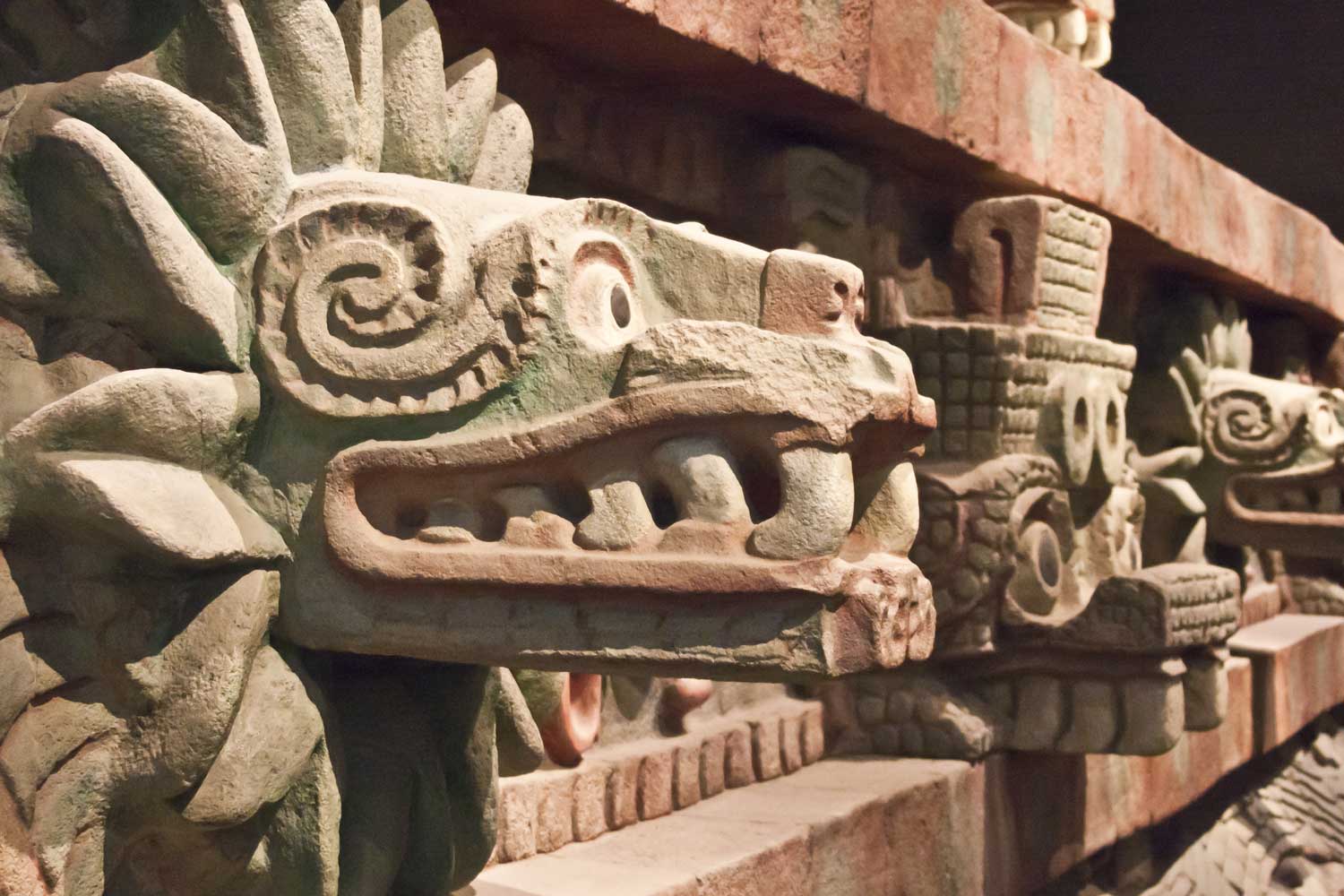 The year, though, is 400 AD and you live in Teotihuacán. This ancient civilization in the Valley of México, 30 miles northeast of México City, was once one of the largest and most populous cities in the world. What is curious is how such a grand society could be shrouded in mystery. While archeologists have developed possible theories about the origin and decline of this ancient city, there are currently more questions than answers. Scientists believe Teotihuacán was firmly established by the 2nd century BC. The community thrived and grew, building pyramids, temples, palaces, housing complexes and centers of agriculture. For reasons still unknown, it was abandoned by the 8th century AD.

From here, we will jump forward in time and work backward. By 1400 AD, the Mexica tribe, now known as the Aztecs, were the superpower in the Valley of México. Even this intrepid group was in awe of the specter of this once great city, which by that time had been abandoned for over 600 years. They named it “Teotihuacán”, from Nahuatl meaning “birthplace of the gods” or “place where men become gods.” Subsequently, the ancient inhabitants are referred to as Teotihuacanos. The Mexica called the main boulevard “Miccaotli,” a Nahuatl word meaning “path of the dead.” This was because the mounds on either side of it looked like tombs. Today, it is known as the Avenue of the Dead and is roughly 130 feet (40 meters) wide and 1.5 miles (2.4 km) long. 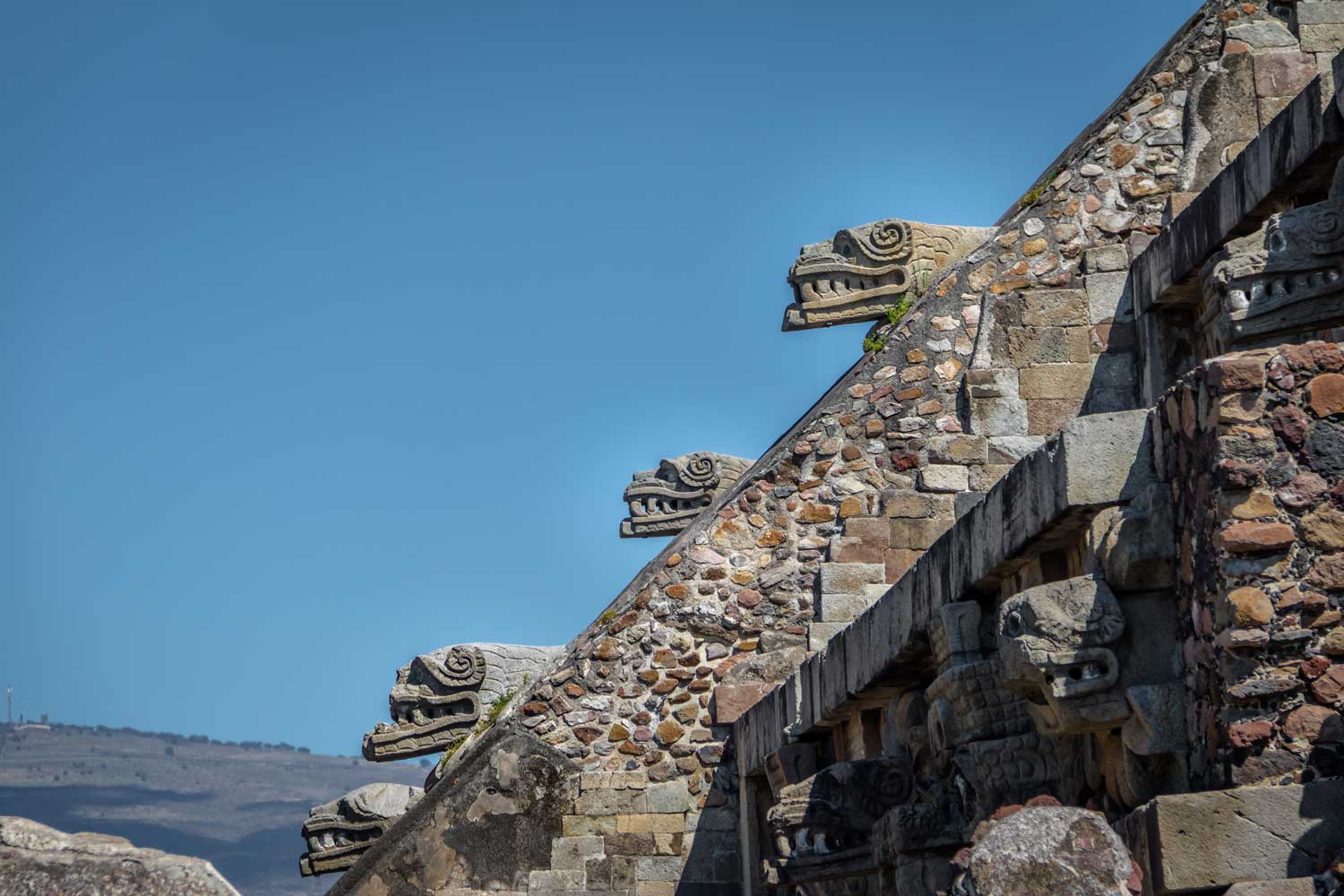 Miccaotli, the Avenue of the Dead

The Pyramid of the Moon

The Pyramid of the Moon is at the north end of the Avenue. Standing 140 feet (43 km) tall and with a base of 426 feet by 511 feet (130 x 156 meters), it is the second largest structure on the site. Its location was chosen to align perfectly with the now defunct Cerro Gordo volcano in the background. 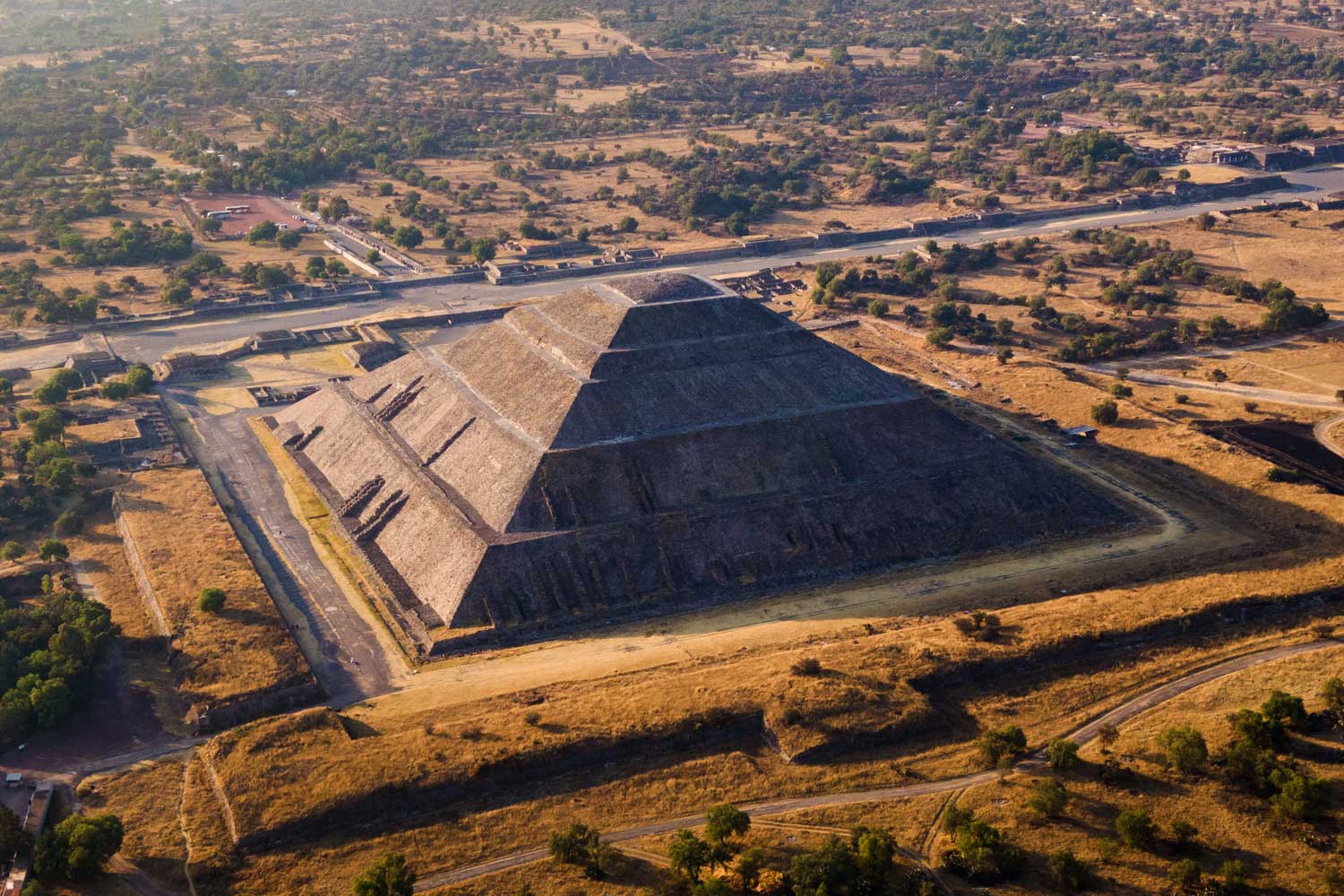 The Pyramid of the Sun

The Pyramid of the Sun is less than a half mile to the south. It is situated to be in direct alignment with the sunrise and sunset on specific days of the year. Constructed on top of a cave, its height reaches 216 feet with a base of 720 x 760 feet (220 x 230 meters), making it one of the largest pyramids in the world. Climbing more than 250 steps to reach the top is not for the faint of heart, but spectacular views await those up for the challenge! 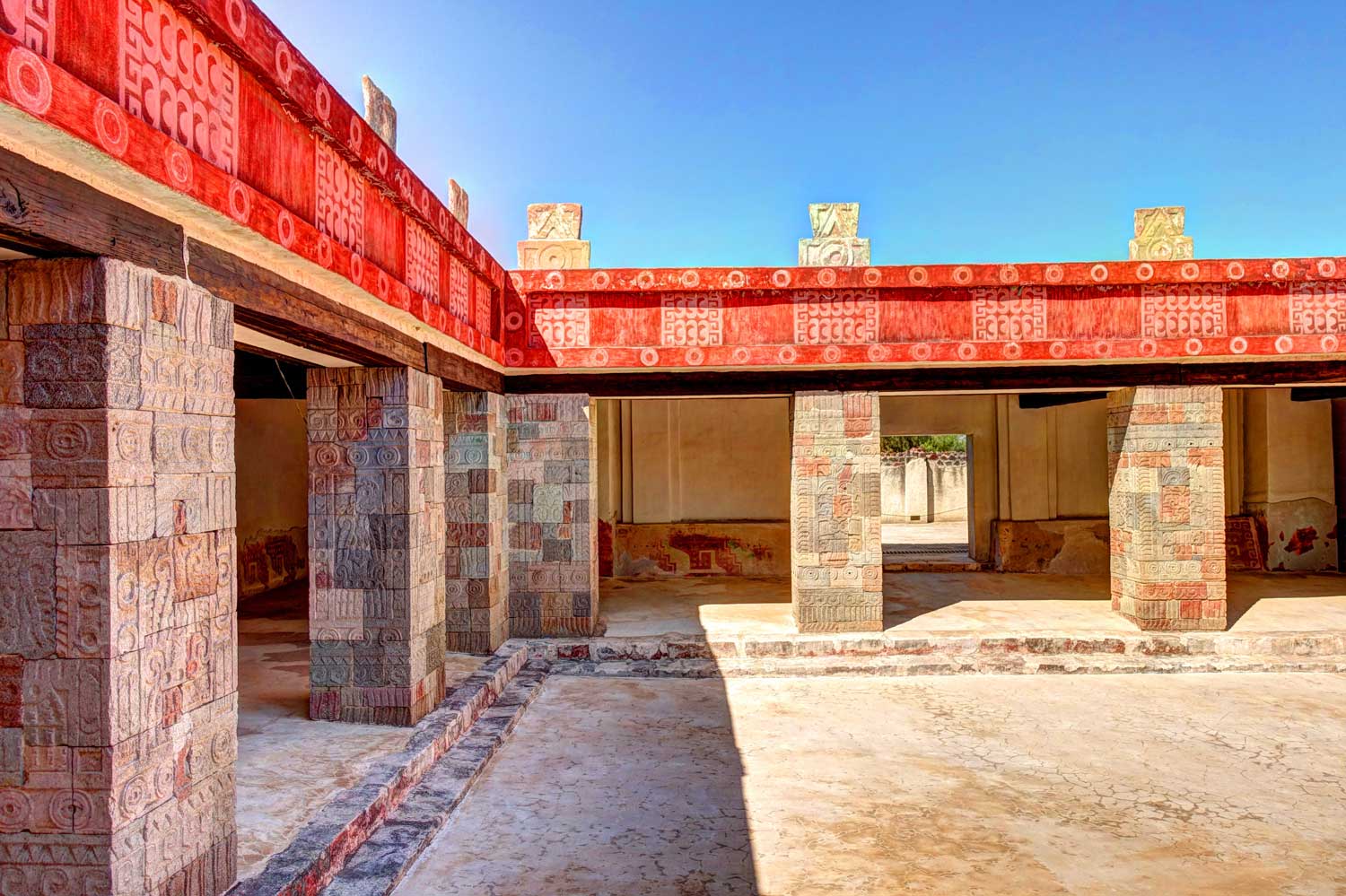 At the south end of the Avenue is the Citadel, an enclosed courtyard which houses the Temple of Quetzalcoatl. This the smallest of the three main pyramids. Like the Pyramids of the Sun and Moon, it was built using the talud-tablero style of architecture. Throughout the exterior of the Temple are three dimensional carvings of Quetzalcoatl, the feathered serpent god, and Tlaloc, the god of rain and warfare. The Temple of Quetzalcoatl was both a religious and political center. It is said that the courtyard of the Citadel was large enough to accommodate 100,000 people. Xipe Totec, the god of spring, was also an important figure here.

The Great Goddess, also called the Spider Woman, is a deity unique to Teotihuacán. The housing units at the Tepantitla and Tetitla area of the site feature brightly colored red and yellow murals of this female figure. While much is still unknown about her, she is speculated to be a goddess of fertility and vegetation. Images of spiders and butterflies surround her. She does not appear anywhere outside of Teotihuacán.

It is believed that royal, political and religious leaders lived within the ceremonial complex along the Avenue of the Dead. In the surrounding areas were multi-family dwellings, like modern day apartments. These housed artisans and skilled craftsmen. Beyond this was additional housing for laborers and farmers. At its apogee in about the 5th century AD, between 100,000 and 200,000 people lived at Teotihuacán, making it one of the largest cities in the world. To support the population, Teotihuacanos employed advanced farming methods. This included the use of chinampas, floating gardens which were common in other regions of México. 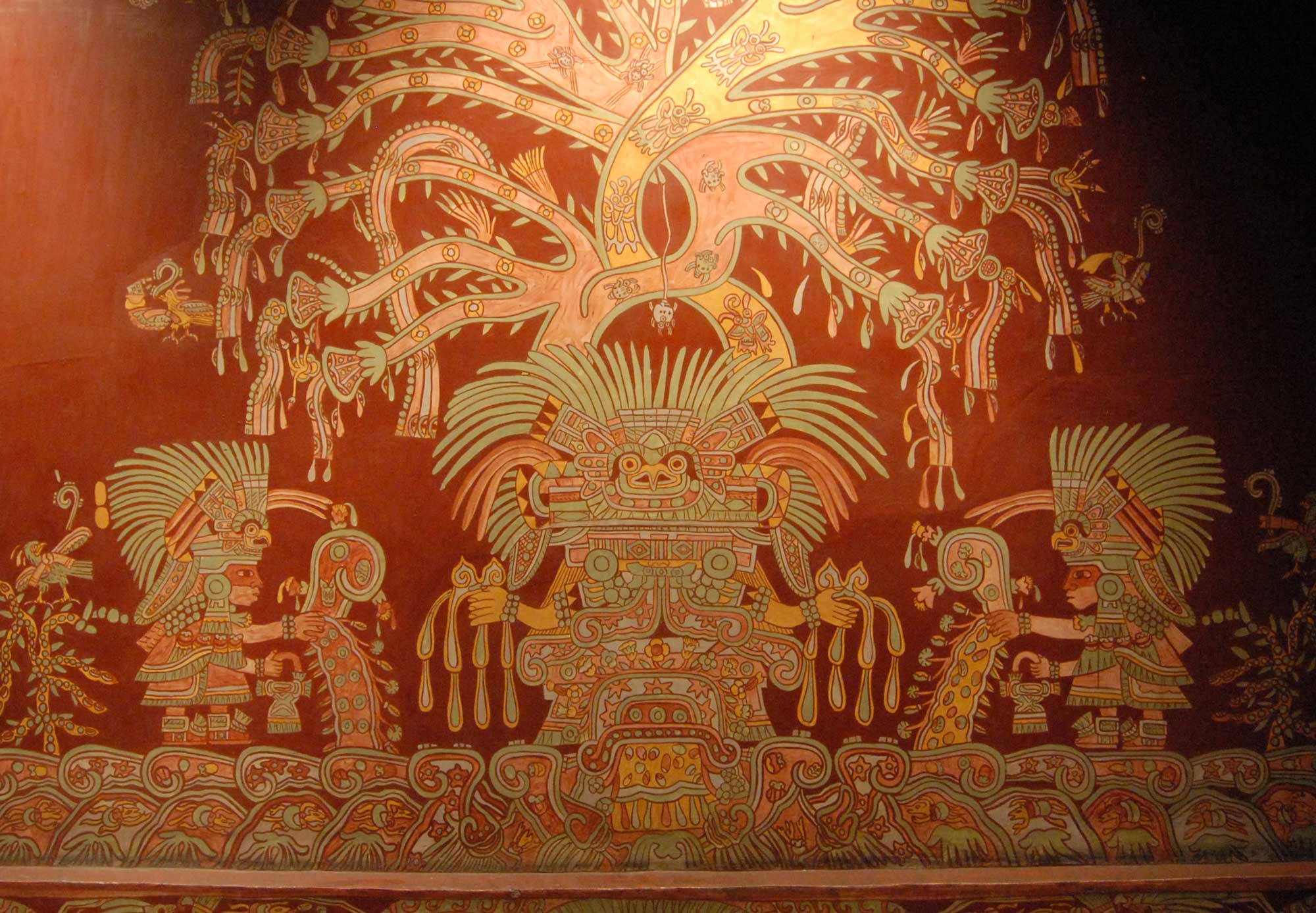 This reproduction of one of the murals depicting the Great Goddess of Teotihuacán from the Tepantitla apartment complex located at Teotihuacán is in the National Museum of Anthropology in México City. 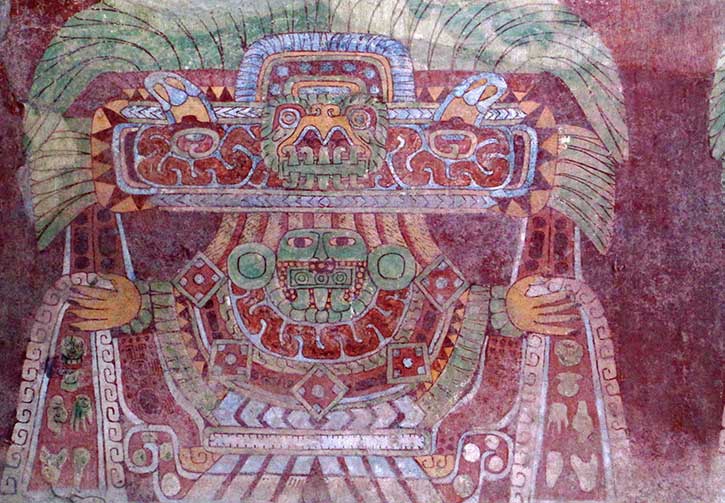 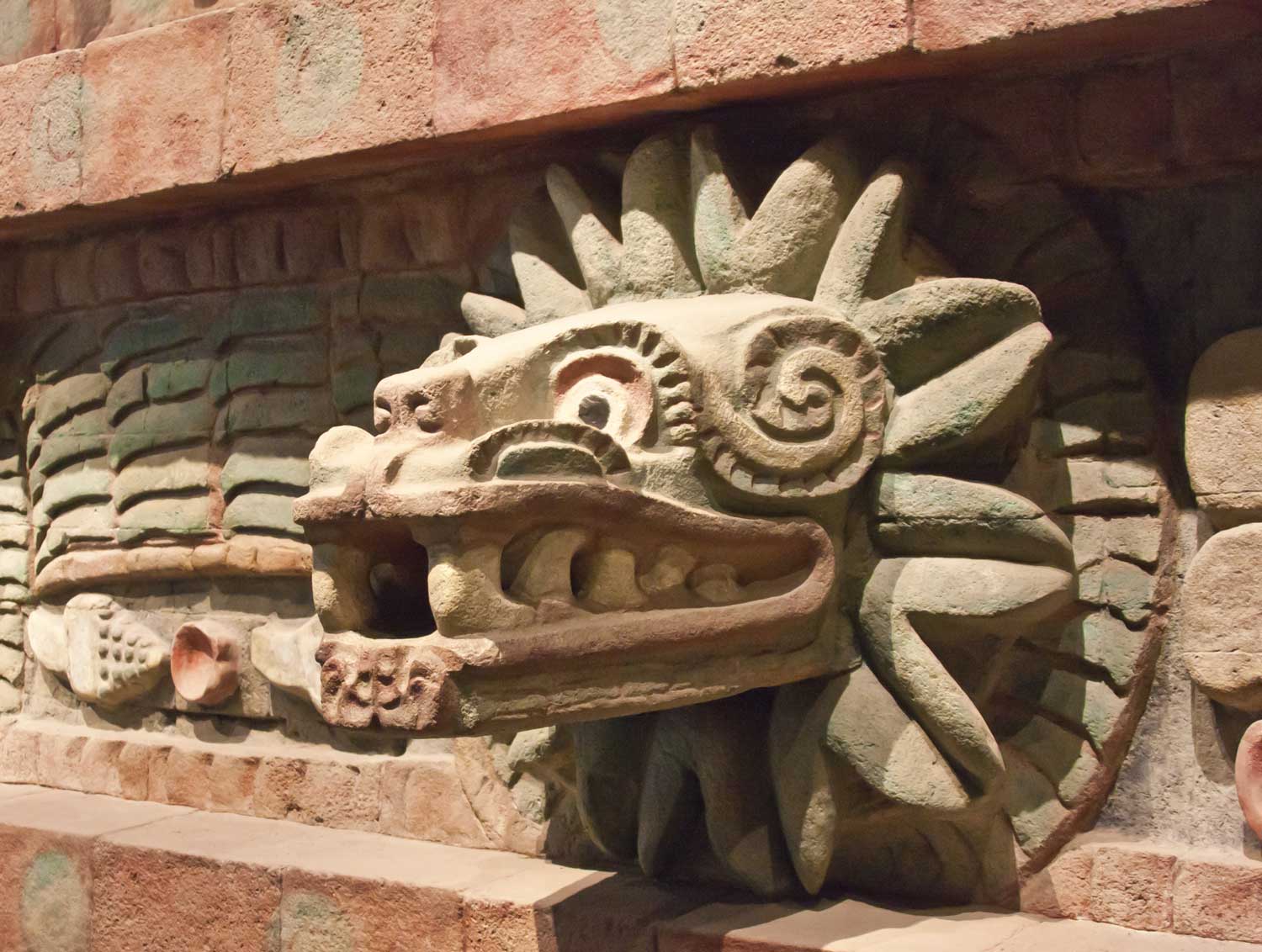 Teotihuacán was not only a powerful religious and political base, it was also an established center of commerce. Located near an expansive obsidian field, craftsmen fashioned tools, jewelry and objects of art from the volcanic glass. Obsidian was the cutting tool of choice with its ability to achieve exceptional sharpness. Evidence of commerce originating in Teotihuacán has been found throughout Mesoamerica.

Like societies of the region that preceded and followed them, the inhabitants of Teotihuacán practiced both animal and human sacrifice. Evidence of two hundred young men believed to have been enemy warriors has been found at the site along with numerous other sacrificial victims.

One of the most remarkable facts about this mega complex is that it was constructed without the use of metal tools, beasts of burden or the wheel. Metal would not be used for functional purposes in the region until about 800 AD. While the debate remains as to the origin of the wheel in the Americas, there is no archeological evidence of it during this era of Pre-Classic and Classic Mesoamerican history.

The decline of Teotihuacán began around the 7th century AD, possibly caused by internal conflict. Major buildings in the elite housing sections were burned and religious sculptures destroyed with no evidence of outside invasion. Drought and famine caused by volcanic activity in the 6th century AD provide an additional theory for the societal decline. By the 8th century AD, the civilization had been abandoned.

Teotihuacán is one of the most popular tourist destinations in México, attracting millions of visitors annually. In 1987, it was designated as a UNESCO World Heritage Site. Getting to Teotihuacán is an easy 1 1/2 hour drive from México City. It is recommended to arrive early in the morning as the sun can be intense during the day and shade is scarce. Be sure to bring sunscreen, a hat and water. The entrance fee is nominal and additional fees apply for parking and bringing video cameras into the site. Allow at least four or five hours to see the entire complex. The onsite museum provides excellent information. Registered guides are available, affordable and knowledgeable.

Teotihuacán is located at: